This week Philip has been studying the events leading to the Civil War.  We have done lessons on slavery, abolitionism, Frederick Douglass, Missouri Compromise, The Compromise of 1850, and Harriet Tubman and the Underground Railroad.  We are following the Complete Book of United States History, Grades 3-5, by McGraw Hill Children's Publishing.

I ask Philip a lot of factual questions about the material, but what is really interesting is now being able to ask Philip's opinion on various matters.  Two days ago, I asked him what he thought of slavery.  His answer:  IT IS WRONG.  IT CARRIED TO EXTREMES A LOT OF (human) NATURE TO ALLOW MISTREATMENT OF PEOPLE.

I have not been much of a video maker, but I have gotten many comments, suggestions, and encouragement to take some videos of me working with Philip.  I was even more motivated after I dug up a video I made last May (click here) which I had forgotten about.  Watching it back and seeing the progress we have made is a great feeling.  I won't make videos a lot, but I'll try to do them once a month or so.

Click here to see Philip answering some questions after a lesson on the Underground Railroad.

Afterwards, Philip created a story based on the picture below of a slave family being hidden in a snow fort by children of abolitionists pretending to play.  In the distance are two men on horseback searching for the family to capture and return to the slaveholders.  Click here to see him spell his story on the letterboard and transpose it onto a computer by typing. 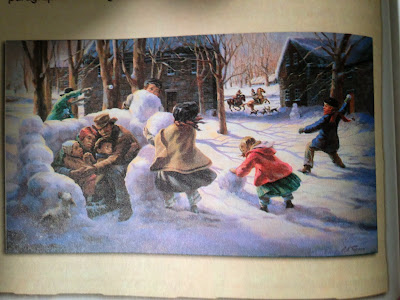 I am a slave. I am running away. A escape seems to be impossible.  A little child is helping me satisfy my desire for freedom.  She is covering me with snow.  I want to play but I cannot risk being seen so I manage to ask Harriet Tubman how to escape from the south.  She smooths the way to the north.  I am frantic to leave.  I am a slave soon to be free.


*  A special Thank You to my daughter Lia, age 8, for always being my enthusiastic helper, my videographer, and Philip's greatest cheerleader.

Posted by Philip Reyes at 5:14 AM No comments:

Today I will start sharing Philip's original writings.  I asked him specifically, "What should we do with your writings?"  His answer: I WANT THEM IN A BLOG.

I am posting his writings without any changes, except to capitalize the G in God.


October 30, 2013
No one marks the Christian like love. Nothing each day is needed quite like it.  Love is found in moments with each day I am asking God for opening me so much to the world.  Yesterday I was dancing to the music inside my head. I was asking God to make me begin to talk.  An angel answered I cannot make you talk.  Your mission is to help autistics. 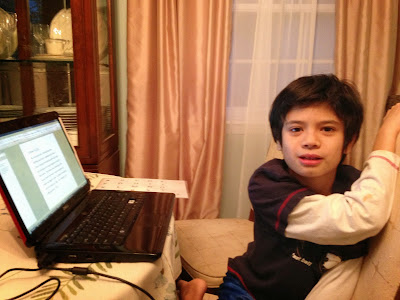 
Last week I received this text from my husband:  Terrifying!  We should talk to Philip about this now that we know he can understand why it is dangerous to bolt and run.  He sent me the link to the story of Avonte Oquendo, a 14 year old non-verbal autistic boy who has been missing for over two weeks after he wandered away from his school in Long Island City, NY.
As soon as I read the story of Avonte, I felt a huge knot in my gut.  I immediately felt Avonte’s mom’s panic and terror, like a nightmare you wish you could wake up from but can’t.  That feeling came upon me at least twice in my life.  The first time, we were living in Miami.  Philip was 4 or 5 at the time.  I allowed Philip to play in our fenced-in backyard for short bouts unsupervised.  This time I got caught up with some chores and let more time pass before checking on him.  When I finally went to look for him, he was nowhere to be found! I screamed his name as my heart pounded loud in my chest.  I called to my mom, who was living with us at the time, “Have you seen Philip?”  “No,” she jumped up.  “Oh my God.  He’s missing!”

I remember calling the Miami Springs police, explaining my son with autism was missing from our home.  He couldn’t speak.  They responded to my call within minutes, saying they would make a careful search of our house first.  I was crying.  We lived only a few houses down from a canal and Philip loved water.  My mind flashed images of rescuers pulling a blue Philip out of the canal, and then pictures of his life in still frames ending in a small coffin.  I thought I was going to suffocate and die.  The police walked along our fence and found a missing slat from our wooden fence.  Philip must have escaped through it.  My mother started combing the back alley and eventually found my son playing in the grass of a neighbor’s yard, completely content.  I hugged and kissed my little boy like never before.  I was so relieved.

The second time Philip went missing was in our new house in Buffalo.  Again I called the cops after looking up and down the street to no avail.  We found Philip sitting in my husband’s car in the garage.  The policeman recommended filling out a form for Philip to file as a potential wandering risk.  It had a place for his picture and a section on things he was drawn to.  I filled it out that day and mailed it to the local station.

When my husband came home the evening after the reading about Avonte’s disappearance, we sat Philip down and read him the article about Avonte.  My husband then did a lesson RPM style with choices.  He asked Philip, how do you think Avonte feels being lost- happy or scared?  SCARED, Philip chose.  Which place is safe to go- street or home?  HOME.  Sam continued with questions such as these with choices.  Sam then asked me to hold the letterboard while he asked Philip questions.  “How can we help Avonte?”  Philip answered, “THE DOOR SHOULD ONLY OPEN TO STAFF.”  Philip had a great point.  Why were the side doors of the school able to be opened by kids?  And why wasn’t Avonte properly supervised?  Sam then asked, “Why is it important not to run off from home or school?”  “I CAN GET RUN OVER BY A CAR” he answered.  I asked Philip, “Why do you think Avonte and other autistic kids run off?”  Philip spelled, “TO ALWAYS ATTACK AT STOPPING SEEMS NOT POSSIBLE.”  I thought about that.  Philip is always moving.  I am always on guard looking after him wherever we go.  He just cannot stay in one place for long.  “Philip, why are you always moving?” I asked.  “THERE IS A LOT TO ENJOY.”  That describes my son very much.  He is the one to splash in a puddle, smell the flowers, twirl leaves, and run with the wind.  I then asked, “How can we help you stay out of trouble.”  “STAY NEAR ME,” he answered.

I hope and pray they find Avonte soon.  I know Philip is praying too.

Posted by Philip Reyes at 5:42 AM No comments:

People all over the world, especially in America, value freedom as a means for independence and self determination.  Although we value freedom, we often take it for granted.  I believe Philip has a much higher appreciation for freedom than I do.  I have always had it, but Philip has not.  For most of his life he has not had the basic freedom to express himself.

As I look over the  past week's lessons and conversations with Philip, I see that Philip was exploring the concept of freedom.  It began last Monday when Philip and his siblings stayed home from school to observe Columbus Day.  Philip and I did a lesson on Columbus and his role in the movement to colonize the Americas.  We did not merely do a preschool lesson, but also discussed some of the negative aspects of Columbus's conquest such as his enslavement of the natives.  After giving Philip a quiz, I asked him, "What is your opinion of Columbus?"  Philip answered, "COLUMBUS WAS NOT A HERO BECAUSE I DO NOT LIKE THE WAY HE TREATED THE INDIANS."

The next day, when I asked Philip what he would like to learn about, he answered "Civil Rights Movement."  We discussed the American Civil Rights movement in the 1960s beginning with Rosa Park's famous bus ride, the various acts of civil disobedience to protest segregation, and the peaceful march on Washington leading to Martin Luther King Jr.'s momentous "I Have a Dream" speech.

After the lesson, I asked Philip to write his own speech beginning with "I have a dream."  This is what he wrote.

I have a dream I go tie a eagle someday to a tree.
I am eager to fly in the sky.
So I ask the eagle how to.
She answers, "Address your fear and you so will fly."
I too might fly.
I am intending to fly high.
I am always happy to fly high.
The eagle is freed to fly with me.
A little while she tries to fly right into the sunset.
End.

At first I was confused.  I expected Philip to write something along the lines of King's speech perhaps talking about a world in which autistic people are fully integrated into society.  That would be my dream.   But true to a child, Philip wrote an animal story.  As I analyzed it, I realized his story was indeed about freedom too.

I remember Philip once explaining the importance of "attaching" himself to a teacher who can help him get his thoughts out.  I believe the eagle in the story is this teacher.  The fact that the animal he picks is an eagle is very interesting to me.  Why not a dog or horse?  America has adopted the eagle as its symbol because it signifies qualities such as freedom, wisdom, command, and  strength.  Philip is eager to fly like the eagle but doesn't know how to.  He needs a teacher so he can learn to fly and be happy.  Eventually he frees the eagle to fly into the sunset, perhaps to teach others to fly as well.  I may be reading into his story, but my hunch is that the eagle is Soma.  Soma is the one who taught Philip to fly.

Tonight I started reading to Philip the book The Reason I Jump by Naoki Higashida.  When I first watched the movie Wretches and Jabberers and was introduced to Higashida on screen for the first time, I thought, "He is just like Philip.  He cannot keep still either."  They are more alike in other ways.  Higashida wrote his book on a Japanese alphabet grid, just like Philip's letterboard.  Higashida writes, "Not being able to talk means not being able to share what you're feeling and thinking.  It's like being a doll spending your whole life in isolation, without dreams and without hopes."  He says of pointing to letters on the alphabet grid, "Often, while I was learning this method, I'd feel utterly beaten.  But finally I arrived at the point where I could indicate the letters by myself.  What kept me hammering away at it was the thought that to live my life as a human being, nothing is more important than to express myself."

After reading to Philip, I asked him, as our bedtime custom, "What are you thankful for today?"  Philip's answer: I AM NOT ALONE ANYMORE. 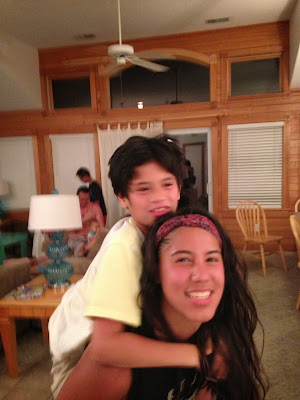 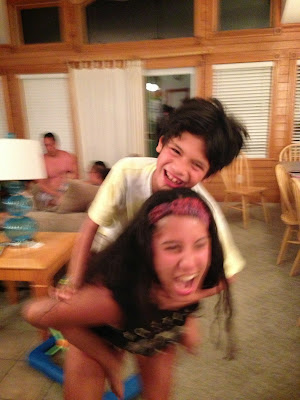 Philip and his sister Ana at Outer Banks, NC July 2013